GETTING TO KNOW MARK TWAIN 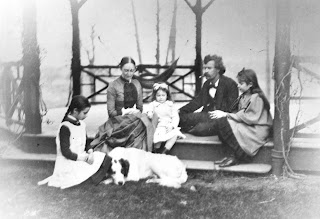 Last night we watched a Mark Twain documentary on Netflix (Have I mentioned how we adore Neflix? Documentaries! Independents! Foreign Films! Seriously, it's almost overwhelming.)

Samuel L. Clemens was quite a guy. And for all his adventures, he endured a great deal of heartbreak too. And lost fortunes. And he hated the lecture circuit! Who knew? But he loved his custom-made home in Hartford, Connecticut. (Totally on the to-do list! Harriet Beecher Stowe's home is in Hartford, too. And Caragh O'Brien, who is just plain WONDERFUL as a writer and friend invited me. Yay!) For all his writings that mocked the wealthy, he certainly enjoyed a certain lifestyle. It's almost like he had a split personality: there was Samuel, and there was Mark Twain. No matter which hat he was wearing, he was completely fascinating.

Of course me being me, I was most interested in the heartbreak. Probably the most tragic time for him was the death of his oldest daughter Susy. She died in 1896 at the age of 24 while he was off on the international year-long lecture tour to earn enough money to pay off his debts.

Samuel (I think it was Samuel and NOT Mark Twain) had these words engraved on her tombstone:

For many years those words were attributed to Mark Twain. Actually they were borrowed from a poem written by Robert Richardson entitled "Annette" that was published in 1893, three years before Twain’s daughter died.

While writing his autobiography, Twain said that he could not remember the author’s name, and apparently he was uncertain of the exact wording of the poem. But as soon as he learned of "Annette" he added the author’s name to the tombstone without changing the verse, although it was slightly incorrect.

Richardson’s original words are as follows:

Twain's daughter Susy was his favorite, according to the documentary. Maybe because she was also a writer and wrote adoringly of her father. I'm a sucker for father-daughter stories, and I have been known to write adoringly of my writer-father, so this spoke to me.

If you'd like to know more about Mark Twain -- and Samuel -- crank up the Netflix! Good stuff. Happy Poetry Friday. Roundup is at Andromeda's!
Posted by Irene Latham at 5:37 AM