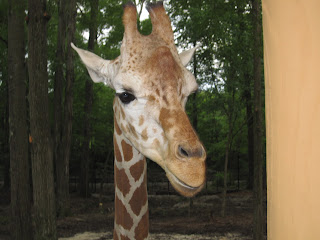 Last night I had the fabulous opportunity to attend a Sundowner at the Birmingham Zoo.
What is a sundowner? 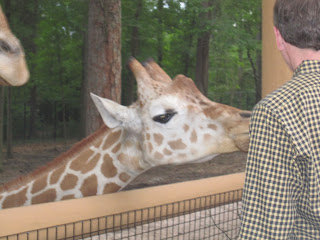 Well, it's a term used in Africa, that sort of means "Happy Hour." Basically after a day of safari-ing, the game driver will pull off somewhere, unload the libations and munchies, and everyone will watch the sunset. (I've never actually experienced this, just heard about it.) 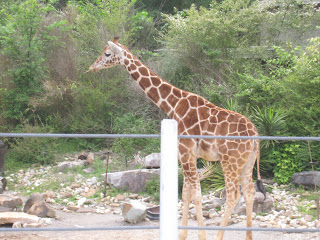 The big news at the Birmingham Zoo is this great new exhibit called GIRAFFE ENCOUNTER. (Grand Opening: April 25, 10 am) And let me tell you: encounter, it is! 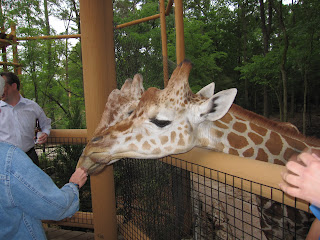 Perhaps you've done a giraffe feeding before, where you stood on a platform and reached up to feed the giraffe.
In this exhibit, the enclosure is designed so that the humans and the giraffes are at eye level. And wow, it makes all the difference! You just cannot appreciate a giraffe's heavily lashed eyes or that swirly dark tongue any better way than this.

Oh, and I learned something, thanks to my friend Cissy, who is so very generous and amazing and the reason I was at the event in the first place: you can tell the males from the females from a distance by the fur on their antlers: females have fur, males don't. (Males would, except they tussle and fight, and the fur gets rubbed right off.)  Fascinating, isn't it? 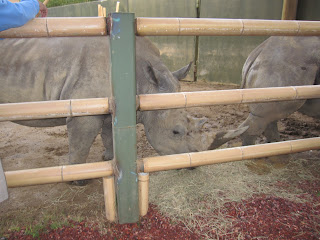 We also got to get up close and personal with the rhinos (we brushed them!), one of the new bull elephants, and the lion family, which for the moment includes five (FIVE!) cubs. (I say, for the moment, because the cubs are nearly a year old and will soon be shipped out to other zoos, according to the SSP (Species Survival Plan).

I told Clay, "red pandas." He told me the pair at the zoo were not eager to mate as everyone had hoped. And I don't know if what I meant was red panda or Bornean sun bear. Or if it's some other animal entirely. I'm thinking... 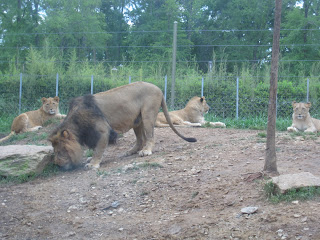 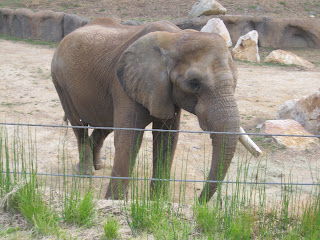 Don't forget: Progressive Poem can be found today with Lori at Habitual Rhymer!

And Lovely Laura continues her 30 Habits of Highly Effective Poets with a contribution by me. What a great series.

Man. So much good stuff this month!
Posted by Irene Latham at 9:15 AM