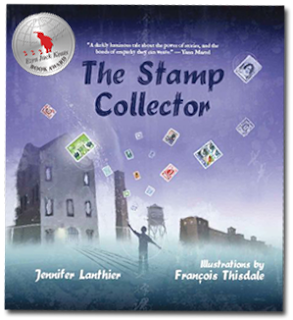 I first became aware of the picture book THE STAMP COLLECTOR by Jennifer Lanthier, illustrations by Fracois Thisdale, at Fay B. Kaigler Children's Book Festival when it was named an Ezra Jack Keats Honor Book. I was moved by Jennifer's speech and knew I needed the book.

Well... the bookseller was SOLD OUT. And life went on, as it does, and I forgot about the book. Until I was roadtripping with two wonderful children's authors Jo Kittinger and Heather Montgomery. We were talking about how it was a title and speech that really stood out to us. When I got home I ordered it.

Before it arrived (it took a while -- not sure why), the book won another award: the Crystal Kite, an SCBWI member's choice award. Then, finally, it was here and I read it and I loved it and knew I wanted to blog about it.

See, my father is a stamp collector. When the story says,

"In his dreams, the stamp is a kite, a paper jewel from the crown of a wise old king.
It holds a secret message; it is a clue to buried treasure.
The stamp is the key to another world - one that is new and full of adventure.
And stories."

... that could be my father talking.

When I was a teenager, my father gave me writing assignments. One time, he handed me an envelope addressed to Charles Lindbergh. The envelope's stamp was from Ireland. Papa said, "write a story about the letter that was once inside this envelope." Off I went on a new adventure.

This book is about connection and yearning and freedom, how stories matter and make us better humans.

It's also, somehow, about my father.