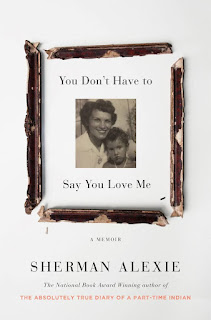 I've just finished YOU DON'T HAVE TO SAY YOU LOVE ME by Sherman Alexie. It's a memoir centered around his mother, written not long after her death. As with many a mother and children, it's a complicated relationship. I enjoyed the mix of poetry and prose.

I learned Sherman's mother Lilian was a quilter:

My mother made quilts.
She would sew instead of sleep


And rage at sunrise.

I learned his father was quiet:

My father wouldn't throw a punch or pull a trigger or names names. Silence was his short bow and quiver of arrows.

I learned Sherman is complicated, as we all are:

I am the one

who is half monk
And half clown.

I will beg, I will beg
For your devotion

Then do my best
To lead you astray.

I learned some of Sherman's thoughts on racism:

Also posting today, my story of "The Summer a Library Saved my Life" over at Smack Dab in the Middle. Enjoy!
Posted by Irene Latham at 7:42 AM