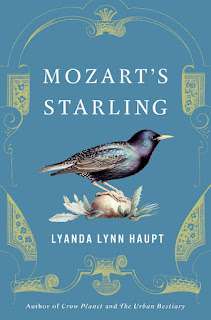 In it Haupt introduces us to Star, Mozart's pet starling, and to Carmen, her own pet starling -- and she presents some insights about how life with a starling might have impacted Mozart's music.

Here are some things I learned:

If you Google 'America's most hated bird,' the top results all refer to starlings. Because starlings aren't native to America and have run off other birds. They are invasive and aggressive, and they are EVERYWHERE.

When Star died (after living with the maestro for 3 years), Mozart wrote an original poem and staged a funeral.

Mozart's piece "A Musical Joke" (a playful piece with a wildness that critics never warmed to) sounds very much like a starling's song. And it's the only piece by Mozart that the author's starling Carmen responds to with excitement.

Mozart and his bird actually had a lot in common. Here's Haupt:

Haupt loves birds. Clearly. How else could one tolerate -- and love -- a pet starling? They are social and fragile and loud. And they poop a lot. Not for me, I say! Not for me!

But. My almost-15 year old nephew Matt has a pet cockatiel. His name is Frosty. My sister says that Frosty perches on Matt's shoulder while he (Matt) sleeps!

"I loved the uniqueness of having a pet bird and I enjoyed the idea of an independent pet. Frosty has an attitude of a human -- he’s a human stuck in a birds body. The most important thing to know about having a bird is that all they want is for you to feed them and love them. Frosty sings all the time but mostly when he’s happy. I love it when he whistles 'pop goes the weasel.'"

Thank you, Matt, whom I adore!

And now back to Mozart. Not only did Wolfgang enjoy musical play, but also wordplay. Here's a fun Jabberwocky-ish excerpt from a letter Wolfgang wrote to his wife:

"I have received reprieved your highly esteemed writing biting, and I have noted doted that my uncle gafuncle, my aunt slant, and you are all well mell. We too, thank god are in good fettle kettle. Today I got the letter setter from my Papa Haha safely into my paws claws."

More from Haupt:
"Poet Gary Snyder wrote that wildness is 'a quality of one's own consciousness,' an elemental characteristic that ran deep in Mozart -- he had a way of being, a habit of imagination that belonged int eh realm of wildness and nature, regardless of where he lived. It is a quality that, at some level, we all share."

Here's another quote I love from the book, about being a writer:

"People always ask how I get the ideas for my books; I think all authors hear this question. And, at least for me, there is only one answer: You can't think up an idea. Instead, an idea flies into your brain - unbidden, careening, and wild, like a bird out of the ether. And though there is a measure of chance, luck, and grace involved, for the most part ideas don't rise from actual ether; instead, they spring from the metaphoric opposite - from the rich soil that has been prepared, with and without our knowledge, by the whole of our lives: what we do, what we know, what we see, what we dream, what we fear, what we love."


And I love Haupt's conclusions about "the river beneath the river" -- that something below the surface of any art that teases, prickles, stuns...

"And what is this wild summons? What art is asked of us?"

To live our poems, methinks.

Says Haupt: "To wander paths, nibble purslane, notice spiders. To be rained upon. To listen with changed ears and sing back what we hear."

Read this book! It's a good one. And if you're a bird person, I'd love to hear more about that in comments!