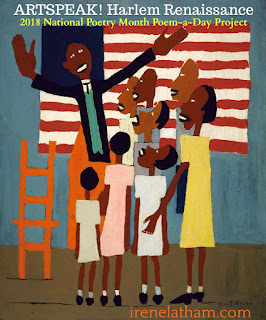 Hello and Happy Poetry Friday! Be sure to visit Tabatha at The Opposite of Indifference for Roundup... and some celebratory words for the release of her anthology IMPERFECT. Congratulations, Tabatha and contributors... more on this in May!

Welcome to day #20 of 2018 ARTSPEAK!, in which I am focusing on art and artists from the Harlem Renaissance. Today I am still enjoying events with Charles Waters in New York City... and we hope to make it to Harlem. :)

Before we get to today's poem, please be sure and visit Linda at Write Time to see how our Progressive Poem is progressing!

Today I'm continuing my Harlem Renaissance poetry project with a look at sculptor Meta Warrick Fuller. Tomorrow will be our last day with Fuller... then on to William Johnson!

Talk about a woman ahead of her time! Fuller was a poet, artist and sculptor -- the first African American woman sculptor to rise to any sort of prominence. She was also a feminist and activist. Her works celebrated African American heritage and focus mostly on themes of identity -- never shying away from the horrible (see A Silent Protest Against Mob Violence). Even Auguste Rodin admired her work. And here is a favorite quote from Fuller herself:

“Let us train ourselves to see beauty in 'black.'”

Today's piece is called Storytime. First I was thinking of all the sweet things I could say about storytime. But that would be kind of cliche, wouldn't it? Then I remembered how Fuller's known for her bravery in addressing terrible things. That word "terrible" stuck in my brain... it made me think about what helps me through a terrible day, and that is so often reading and creating poems/stories! And so my poem became a story of sorts... and it rhymes! I am generally not a rhymer. But this seemed to fit this poem. Here it is: 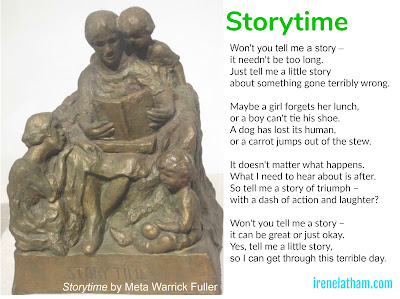 Won't you tell me a story –
it needn't be too long.
Just tell me a little story
about something gone terribly wrong.

Maybe a girl forgets her lunch,
or a boy can't tie his shoe.
A dog has lost its human,
or a carrot jumps out of the stew.

It doesn't matter what happens.
What I need to hear about is after.
So tell me a story of triumph –
with a dash of action and laughter?

Won't you tell me a story –
it can be great or just okay.
Yes, tell me a little story,
so I can get through this terrible day.