WHEN IN GEE'S BEND 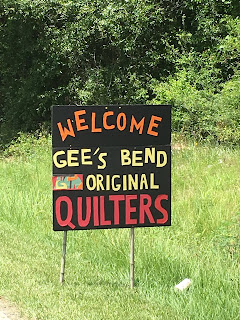 Last week Paul and I took a quick jaunt down to Camden and Gee's Bend for a program arranged by Alabama Folklife Association. It was great to get away! We especially enjoyed visiting one of my favorite shops ever: Black Belt Treasures, where there are lots of quilts and other folk art created by Black Belt artisans. 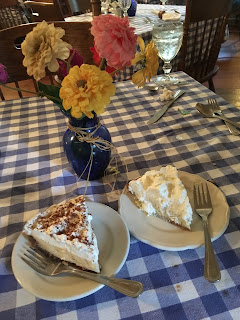 I also got to take Paul to Gainesridge Dinner Club, where you can enjoy black bottom pie, which is listed as one of the 100 Things to Eat Before you Die. (We also had key lime pie, and Paul said it was the best he's ever had!) 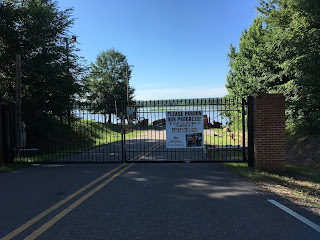 In the morning we drove over to Gee's Bend -- drove over, because the ferry is currently closed as it's being converted to all electric. Y'all, this is a big deal! When it's completed in August, it will be one of only 2 all-electric ferries in the world! I can't wait to come back and ride it. :) 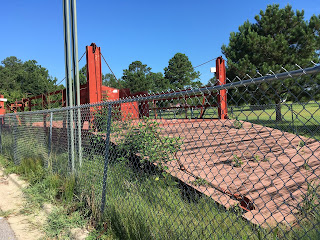 The workshop was held at the Gee's Bend ferry terminal, and while I have been there a number of times, I never noticed in the yard parked an older version of the ferry! How have I missed this?! It's not the chain ferry from LEAVING GEE'S BEND, but it's close. 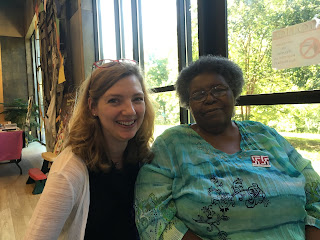 The workshop was conducted by Tinnie and Minnie Pettway (sisters!) of That's Sew Gee's Bend, who helped us make potholders in the Gee's Bend style. Tinnie was the very first quilter I got to know in Gee's Bend, so it was a great pleasure to see her again. 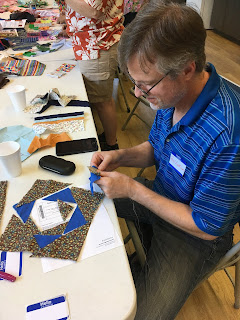 But the best part? Watching Paul put in his very first stitches on his own potholder! Minnie came over and got Paul set up, and then he went to town. I was super impressed with his tight, even stitches... especially as I opted for machine stitching both for the piecing and the quilting. Not Paul! He did it old-school. Fun!

On our way out, we stopped in at Mary Margaret Pettway's house where Marlene had her quilts out in glorious display. She told us stories behind many of the quilts, and we walked away with this one: 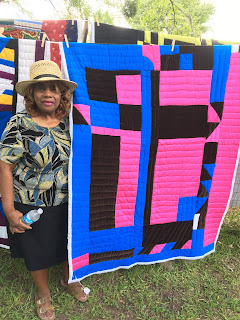 Don't you love the bright pinks and blues? Also, you can't tell from the pic, but the brown fabric is actually a velvet, so it's got a lovely texture. We love it! 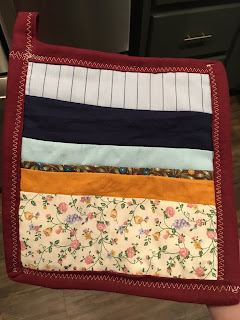 Finally, here's a pic of the potholder I made. I got the award for finishing first. Ha! (There's a reason our son Andrew calls me Speedy Irene-y. :)

I'll be going back to Camden/Gee's Bend later this year, just as soon as the great Mary Ann Pettway has completed the quilt I've commissioned... and maybe to talk with a book club that's reading LEAVING GEE'S BEND. I can't wait!