Getting to Know Miss Eudora

One of the great things (among so many!) about visiting Jackson for the Mississippi Book Festival was visiting Eudora Welty's home.

Eudora is Mississippi royalty. She's the one who donated her house to the state, and then lived in it (from age 16) until her death quite a few years later.

Eudora never married and never had any children, though I am told she did have a love interest. I must know more! I also really wanted a copy of her book ONE WRITER'S BEGINNINGS, but they were sold out in the gift shop. So.... I came home and ordered myself a copy.

I also loved the museum next door where we watched a film about Eudora, and enjoyed framed letters and such. Eudora's sense of humor really shines in this postcard sent to Charlotte Capers's dog Holly, after Holly gave birth to puppies: 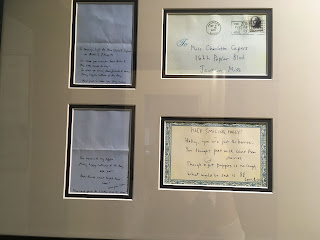 Holly, you are just the berries.
You thought pet milk came from dairies.
Though eight puppies is no laugh,
what would be sad is 8 1/2. 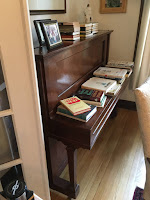 Eudora and I have that postcard habit in common. :) We also have being superreaders in common -- when she died, there were 5,000 books in the house -- and they were piled up in all the expected places as well as some unexpected places, too... like on top of the family Steinway piano. :)


Finally, here is a painting of Eudora that depicts her as the steel magnolia I do believe she was! Thanks especially to all those great docents for sharing stories about Eudora's love of Maker's Mark and disdain for newfangled things (like coffee makers). Oh, and have you ever hear of the "cut -n- pin" revision method? Eudora cut up her first draft and rearranged passages, much like a quilter rearranged fabric pieces when working a quilt top. Fascinating!