VALERIE WORTH POEMS ABOUT WILD CRITTERS

Hello and happy Poetry Friday! Margaret has Roundup at Reflections on the Teche. I'm back with more Valerie Worth poems. For other posts in the series, please see left side-bar. I'll be continuing this series through the end of August. So much Valerie to love!

Today I want to share poems about wild critters. Not zoo animals, not pets and not birds. Animals you might find hiding in the woods or in the backyard or garden.

sometimes, around
Moonrise, a wraith
Drifts in through
The open window:
A vague cold taint
Of rank weeds
And phosphorescent
Mold, a hint
Of obscure dank
Root hollows and
Mist-woven paths,
Pale toadstools and
Dark-reveling works:
As the skunk walks
by, half vapor half
Shade, diffusing
The night's uncanny
Essence and atmosphere.

At a library summer reading program presented by Auburn University's raptor experts, I learned that owls -- which don't have a sense of smell (who needs it when you've got those eyes?!) -- are not opposed to eating skunk. Interestingly, they leave uneaten the part of the skunk that produces and stores their awful odor.

One of my favorite Gary Paulsen stories is from his book WINTERDANCE when he talks about when he first was training for the Iditarod, he was advised to run the dogs at night. What he didn't anticipate was how often the team would run up on a (nocturnal) skunk! After he and his team were blasted by a few skunks in one night, he came home and his wife said he better go sleep in the kennel with the dogs. :) It was that night that he realized that in order to become one with his team, he actually did need to sleep with them. So, yay for skunks and the lessons they bring!

A dark
Hall behind
The hall,

Odd rooms
That other
Rooms hide:

A world
Inside
The wide world,

And space enough,
Even in
Small spaces.

I've never been one to jump up on a chair because of a mouse. They aren't exactly sanitary, but they don't freak me out. A few years ago I was at a writing retreat that was located at a rustic mountain resort, and the writer in the room beside me had a mouse scurrying along the floorboards. She came to my room for help. I grabbed a towel and intended to throw it over the little vagrant and carry it outside. Well, as is often the case with a mouse, there was more than one vagrant. That writer ended up staying the night in my room.

The turtle
Does little
But sleep
On a stone,
Alone
In his glass
Bowl.

is he bored
By it all?
Does he hope
Something
Will happen,
After a hundred
Naps?

Or is it enough
To wake
Quietly,
Shawled
In the shade
Of his
Shell?

Mmmmm, naps. I am one happy gal when the day affords me a nap. I don't need a lot -- just half an hour. Preferably right after lunch. Then I am refreshed and happy and ready to tackle the rest of the day. Alas, not all days are nap days.

Who else loves "shawled" in this poem??

The feet of the
Caterpillar
Do no patter
As he passes
Like the clever
Quick paws
Of the squirrel,
But they ripple,
Stepping one pair
After another
And another,
And they travel
With his whole
Long caravan
Of bristles
Down the brown
Twig, to a
Greener midsummer
Dinner.

One of my favorite childhood memories is sitting in the grass with my sister, caterpillars crawling around on our arms or legs. Such a lovely little tickle those soft bristles bring!

The slug
Slides sly
By night,

To nibble
The new
Green shoot,

To riddle
The weak
White root --

Hated
By all
But the moon,

Who smiles
On his scenes
Of crime,

And silvers
His trails
Of slime. 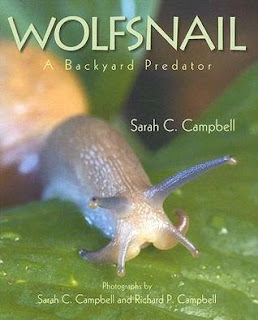 There is more
To a mosquito
Than her sting
Or the way she sings
In the ear:

There are her wings
As clear
As windows,
There are the sleek
Velvets on her back;

She bends six
Slender knees,
And her eye, that
Sees the swatter,
Glitters.


There is more to a mosquito, indeed! I really love it when a poem approaches a pest from a non-pest direction. I mean, I detest mosquitoes. They thrive here in humid Alabama, and can absolutely ruin outdoor activities. But this poem! It makes me see the mosquito as wondrous and beautiful. (You still won't find me without a can of bug spray, though!)
Posted by Irene Latham at 6:00 AM