A Visit with Janet Wong & A SUITCASE OF SEAWEED 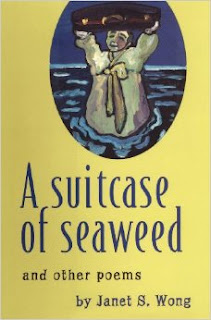 Hello and Happy Poetry Friday! Be sure to visit lovely Linda at TeacherDance for Roundup.

I'm delighted today to welcome poet and publisher Janet Wong to share some poems from her book A SUITCASE OF SEAWEED: And Other Poems (McElderry Books, 1996). Buy the paperback edition here.

I happened upon this book at a book store on St. Simon Island (GA) earlier this year, and was enchanted by the poems that reflect Janet's Korean, Chinese, and American heritage. You'll find Janet's comments below in blue.  I particularly love Janet's last comment about identity - who we are vs. who we want to be. See below! Thank you, Janet, for sharing with us today!

JW: My mother was paralyzed from polio as a child. Her cure: acupuncture, hundreds of needles daily for a year. This was in rural Korea in the late 1940s. If you were to visit an acupuncturist in the U.S. today, you’d probably receive only a dozen needles in a session. But the way she described it to me as a child, poking her finger all over me, I imagined them turning her into a porcupine.

"Chook! Chook! Chook!"
Mother says each time
she digs her finger
into my skin
to show me where
the doctor stuck
hundred of needles
in her swollen, still,
fever-filled body,
when she was twelve.

I have a picture
in my mind
of how she looked -- Chook!
My mother, once
a porcupine.

JW: I got my first acupuncture treatment after a severe ankle sprain, when I was a teen. Acupuncture, as it’s practiced here, is not supposed to hurt, but my mother believes that it’s only working if it hurts. My mother kept telling the acupuncturist, “More needles! More deeper!” I ended up with double the amount he originally had inserted. The pain was quite intense when he twisted the needles halfway through the session. I did my best for the next few days to hide my hobbling from my mom so that I wouldn’t need to return.
---------------------------------------

She calls me tofu
because I am so soft,
easily falling apart.

JW: About identity: Race matters, of course, but I worry when we overemphasize race and ignore other things that make up who we are; I’ve written many poems about the complex issue of identity. Now, at the beginning of the school year, the question for many kids (especially teens) isn’t “Who am I?” but rather “Who do I want to be?"

Which?
by Janet Wong

Two dresses hang
side by side
on the sale rack,
the tag of one so worn
it seems the price
was not believed,
but looked at, at least twice,
by many who might buy.

It is real: this
black velvet gown
overgrown with
lush, bright flowers
is cheap, dirt cheap,
even cheaper than
the simple chambray dress
some careless hand
has pressed up against its back,
the white plastic hanger
crushing one velvet flower.

Which one is you?
Wear this plain blue frock
twice a week and feel safe,
no one will talk;
but wear the other,
with its strange power
that makes you think
that boys will swoon,

and a second time
a season
is too soon.