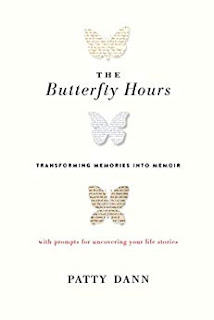 I welcome you to join me, if you like! I've divided the prompts by month, and the plan is to respond to 3 (or so) a week. For some of these I may write poems, for others prose. The important thing is to mine my memory. Who knows where this exploration will lead?

For links to the prompts I've written on so far this year, please click on The Butterfly Hours tab above.

I don't have any childhood snowstorm memories -- I did love the descriptions of snow in the LITTLE HOUSE books, though!

As an adult I have wonderful memories of the snowstorm of 1993 here in central Alabama. Paul and I lived on a mountaintop in a middle of forty acres. The drifts were crazy-big and so white! Our power was out, and because our water ran on an electric pump, we were out of water, too. And we couldn't leave our property because of the whole living on top of a mountain meant a very steep driveway which was impassable for nearly a week. We cooked steaks in our fireplace. We camped out next to the same fireplace. We spent the mornings in the sun room where the windows warmed the room. We played Trivial Pursuit 80s edition, and Paul won. And then... it got old. I wanted it to be over. I wanted the snow to melt. It still took a few more days.

A more recent snow/ice event was the snowpocalyse of 2014  I was driving with Daniel to pick up Eric for a special lunch out, because school was being let out early. As we were heading toward Birmingham on Hwy 280, the traffic slowed considerably. By the time we got to the school, the snow and ice combined with everyone getting off work/school created an impossible traffic jam around the city. NO way could we get back home!

We hiked instead to my friend Jim's bookstore. Eric was in flip flops (due to have had an ingrown toenail removed), so we stopped at the shelter on the way to pick up some socks and other supplies. I asked Jim if we could hike and stay at his house, but he thought we'd be better off at Eric's school (a boarding school). Later, he said he thought we'd enjoy the adventure. Daniel didn't care for this plan, so he said he'd walk home.

Eric and I went back to the school to wait it out. We ended up staying the night and going to the Alabama Power building for supper. I think it was far more fun for the kids than the parents. It was pretty brutal sleeping on the floor. I couldn't wait for things to warm up enough the next day for us to try getting our car home.

We were the first ones to brave the roads, and we had no idea what we were in for! The roads were still treacherous, and now the roads were stacked with abandoned cars. It truly was like the apocalypse! We had to go like 10 mph most of the way. It felt like a miracle when we finally got home. We were jealous of Daniel who had walked and hitched his way home the night before. Andrew did some walking, too, after he wrecked his car coming down the hill on Caldwell Mill Rd. from school. He had to leave the car and walk the rest of the way home. To make matters worse, he couldn't get in touch with us because the phone service was down. Meanwhile Paul was stuck at work. He was able to get to WalMart to get some blankets and food for he and his employees. They slept on office furniture. What an adventure for all of us!
Posted by Irene Latham at 11:34 AM