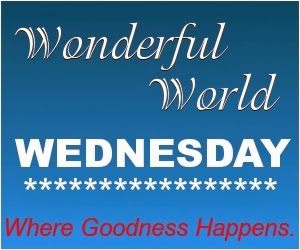 Today's installment of Wonderful World Wednesday comes live from our local Winn Dixie, where my 17 year old son works as a bagger/parking lot attendee. He worked Monday night as record-low temperatures were setting in, and he said he felt like a popsicle. He also said he was re-thinking this whole recent obsession he's had with snowboarding.

And he showed me a pair of gloves. And a scarf. Neither of which he had taken to work with him in the first place.

They were gifts, he explained. From random strangers. People buying groceries who saw him in the parking lot and knew they had what he needed. He said it made the night more fun than playing video games, which, if you know my son, is saying A LOT.

To those folks who saw a kid in need and did something about it: thank you. I promise to pay it forward.

What a Wonderful World!
Posted by Irene Latham at 6:00 AM